The haunts of the Muses stand in ruins. Parnassus is only a geographical site, a mountain in Greece-8062 feet above sea level. Elsewhere in Greece stone columns thrust their lovely lengths into the sky, or lay scattered upon the ground, and the curiosity and cleverness of modern man has compelled the Muses themselves to flee from the ruins.

Similarly, stone walls in other parts of the world crumble while man, impelled to search for meaning, scrapes and picks and chisels and shovels at the past, hoping to discover the present and the future.

Old houses, abandoned, are shattered, weathered, and then moulder. The spirits of the humans who once sought shelter and comfort there before the boards, the bricks, the windowpanes were ruins, vanish. Eventually, the buildings themselves are gone, returning to their source: the earth.

Yet the human spirit goes on, recorded in the works of man, which works, though in ruin, connect the four tenses of man's existence. Four, because there is only one perfect tense for the spirit of man. His actions go on, never fully completed in the past or present. Archaeologists and historians uncover the past, read its records, and find it much like the present, a structure rising from the ruins of what went before, changing in some ways, remaining constant in others.

Among the recorders of their times are the artist of all kinds. Often the record they create reveals the process of ruin going on in the society in which they live. Their revelations can help their contemporaries to shore up the walls where needed and to tear down and rebuild where required. As the present is built upon the ruins of the past, so the future will rise from the ruins of the present. The Muses, contained within the human spirit, will help direct the builders for the future, if they are allowed to do so. And the true and only permanent building, directed and completed finally by the Spirit of God, will stand in the perfect future in His eternal city. 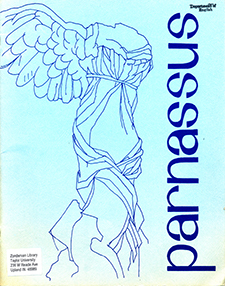 All texts and images copyright of their respective owners.